Leslie T. Thornton has been a Washington, D.C.-based attorney for over 30 years. After growing up in Philadelphia with a twin sister and two older brothers, she began her legal career as a D.C. Public Defender. There, she tried armed rape, murder, and conspiracy cases. Later, Thornton spent eight years as a senior executive in the Clinton Administration. Among other things, Thornton was her agency’s representative for the Continuity of Operations of Government plan. Holding a top-secret clearance, Thornton received top-secret national security briefings at “undisclosed locations,” and that is all she can say about that! Thornton also worked closely with President Clinton on education and political matters and was Deputy Advisor for the 1996 Presidential Debates. Thornton has received numerous legal awards over her career, but she is perhaps proudest of her recognition from the U.S. Secret Service for work in creating a permanent partnership between the USSS and the U.S. Department of Education on threat assessment for U.S. schools.

Thornton has been a law partner in two top D.C. law firms, and general counsel for a multi-billion-dollar energy company in charge of nation state actor cyber security for critical infrastructure in Washington, D.C., among other responsibilities. The seriousness of this responsibility led her to return to Georgetown Law for her LL.M in National Security Law. In addition to her legal career, Thornton has served as the only Black woman on the corporate boards of two multi-billion-dollar public companies. Over the years, her opinion pieces have appeared in such publications as The Wall Street Journal, National Journal/Legal Times, The American Lawyer, The Boston Globe, The Washington Times, and The Daily Oklahoman, among others.

When she was just 15 years old, Thornton’s uncle—an original Tuskegee Airman—taught her how to fly. Or tried to. She had a little trouble with her s-turns. In the early 2000s, Thornton threw a letter-high strike as the opening pitch at a Nationals game—from the mound. Two years ago, she participated in an operation with the U.S. Secret Service. And that’s all she can say about that! 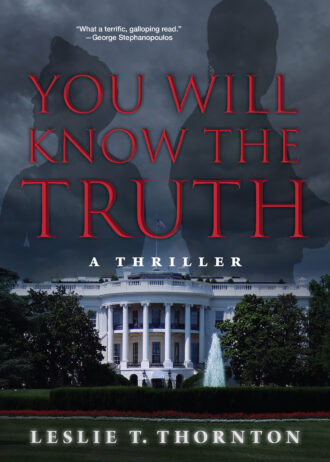 You Will Know the Truth

$9.99 – $24.99
ByLeslie T. Thornton
You Will Know the Truth is a twisting, riveting plot that take Attorney Nicki and her cohort the secrets, murder, and government agencies to an unexpected ending.
View products
Add to wishlist
Compare